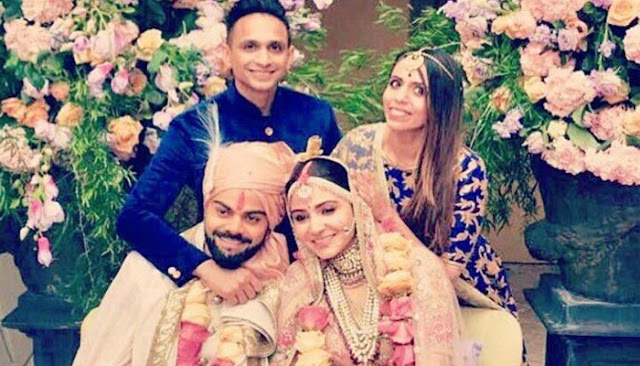 MUMBAI: He´s the "king" of Indian cricket. She´s a glamorous Bollywood actress and former model. Newlyweds Virat Kohli and Anushka Sharma are celebrity royalty and India is cock-a-hoop over their marriage.

"Officially India´s First Couple," screamed the front page of Mumbai tabloid Mid-Day on Tuesday -- a day after the pair tied the knot at a private ceremony in Tuscany, Italy.

"Clean bowled!" read the Mumbai Mirror´s headline, one of several newspapers to report the much-anticipated news using a cricket theme. Another publication wished them the best in their "new innings".

Kohli and Sharma, dubbed "Virushka" by local media, have generated the same sort of excitement and coverage in India as Britain´s Prince Harry and fiance Meghan Markle have in the West.


Both 29, Kohli is India´s cricket captain and one of the world´s highest-paid athletes, while Sharma is an award-winning Hindi film star whose credits include the hit movies "Sultan" and "PK".
"We don´t have a more power-packed combination than this across Bollywood or the cricketing world. They can be called new-age royalty," Indranil Das Blah, a marketing executive, told AFP.
Monday´s wedding ended weeks of speculation in the gossip pages of India´s newspapers and on the airwaves of the country´s excitable 24-hour news channels that the couple had recently got engaged.
But while messages of congratulations poured in from Bollywood and cricket stars, some pessimistic astrologers in India -- where many are superstitious -- struck a different chord by sounding a note of caution.
"While all seems to be perfect in their fairytale wedding, it might not be a very smooth sailing together for them in the years to come, predict astrologers," read an article in Mail Today, ominously.
Astrologers are concerned there may be "disharmony" and "disputes" in their marriage if they are unable to "maintain a balance between their personal and professional lives", it went on to say.