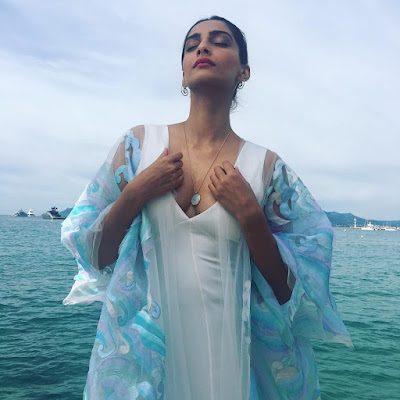 Sonam Kapoor is on a roll! Unleashing all that’s in vogue, Sonam Kapoor is raking up a stylish storm in Cannes at the International Film Festival. Her co-conspirator in this is her sister and stylist, Rhea Kapoor who with her keen fashion sense and an eye for detail always manages to doll up Sonam in the most fabulous looks that make us swoon for more. It was certainly a pleasant and a much-awaited surprise when the Kapoor sisters decided to come up with the brand, Rheson for all the fashion connoisseurs out there. Playing with prints with some serious vibes from the 90s, the duo has been making a serious case for some of the cult fashion in India. Stunning us with a melange of looks, Sonam Kapoor decided to send everyone in a complete state of frenzy with her second red carpet look.

Sonam Kapoor gave us monochrome vibes with her airport look as she left for Cannes, then she stunned us with a psychedelic printed saree and sparked a rosy charm with a spectacular Elie Saab gown last night. Here’s what Sonam wore for her red carpet look tonight! 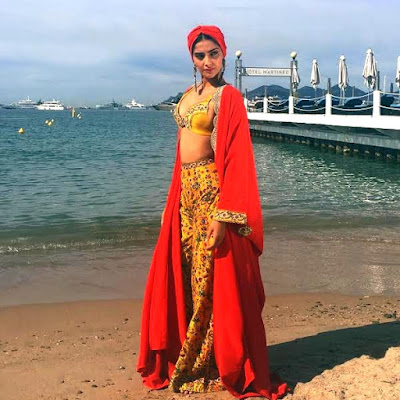 Wearing a customized kaftan in pristine white and blue shades, Sonam Kapoor cuts quite a pretty picture amid a pristine backdrop as she gives us a sneak peek of her awesome ensemble, aptly complimented by delicate baubles by Noor Fares. The deep V pattern on the front and back add charm to this ethereal creation. We see Sonam and Rhea pull off another Indian creation, a balance missed by most Indian divas on the International red carpet. Sonam sports pink lips, a non-messy high bun, and bold eyebrows in this look!
Riding high on the overwhelming success of the biopic, Neerja which clinched a National Award for the Best Feature Film, Sonam Kapoor is ready for her next on-screen venture. She will be seen in the Rhea Kapoor produced girly movie, Veere Di Wedding and share screen space with Kareena Kapoor Khan, Swara Bhaskar and Shikha Talsania.